One word, intense. That’s Marley Makarah’s album, “Taking out the Trash”, described in one single breath. He’s not afraid to be original, left-field or experimental. He has a unique style within the rap/hip-hop genre that moves between trap right through to alternative hip-hop. If you like the direction his music has been going then you’ll love this collection of 12 songs. This album has a broad sound with multi-layered tracks that are constantly growing and changing. This excellent mix keeps you on your toes and smiling from the beats alone. With the addition of the lyrics this album is ridiculously good. Sure Marley’s explicit and downright nasty sometimes, as the hedonistic themes infiltrate these songs. But if you’re looking outside the mainstream pastures for your daily dose of real hip-hop, you know that limitations and boundaries are about to be broken, bigtime. 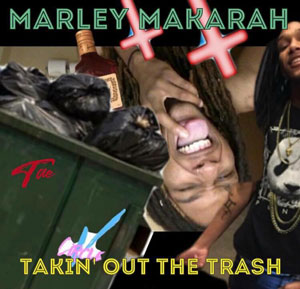 If there’s an animating principle that runs through all of Marley’s work to, it’s a willingness to challenge expectations at every turn. The Overland Park, KS based rapper, uses his voice as a blunt weapon, crashing his way through tracks, forcing you to pay attention. He’s someone who thinks hard about cadence, about keeping his voice in the pocket of the beat. Something that comes into play straight off the first track, “Album On The Way”.

He toys a bit with the genre’s conventions, but he also hears the genre as one that’s big and inclusive enough for whatever sounds he comes up with. And he’s right. Rap has always been a more fluid and advanced form of music than its detractors, or even some of its devotees, are willing to believe, and it damn sure has room for Marley Makarah. Listen to how he twists his flow on “Hoestheyallhoes” ft. Ba$ikcable. He’s got an endlessly impressive rhythmic command.

“Taking out the Trash” makes a sterling argument for the intersection of alternative and hip-hop tropes. Tracks like “Rasta Vibes” ft. King Nina, “Thotie$$” ft. Zokonic$ and “(O_o) Stalking”, are recontextualized by Marley’ raps, hard-nosed but deft of cadence, and nuanced to their zenith.

He’s an especially wordy emcee, but is in most ways an unusual one. All told, this is probably as good a time as any for Marley Makarah to exist. Burgeoning interest in alternative rap is no longer viewed with suspicion, but with awe. 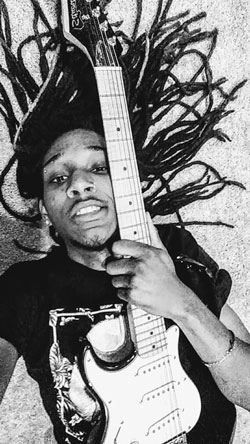 By the time Marley kicks in on “Im T’d”, he is teaming with built-up energy.  This is the type of shit you blast in your room when your parents piss you off. There’s been a deluge of exhilarating, blood-pumping galvanizing hip-hop lately: this track should be on that play list.

Without the need to turn to your local rap radio station to understand the state in which hip-hop culture has evolved, one listen to “Stucc” ft Tuzi Uzi Turnt and Xxquesox, and “Proof” ft. D.C and Kenya, will be enough to convince you.

And if the previous track was minimal and laidback, “Fyuck” will knock your sound system into orbit with its aggressive tones. Luckily it only lasts one minute and twenty six seconds, or you would need to replace your speakers.

“Thrasher” ft. Tae The Lame, also retains a growling bass and an in your face vocal delivery, just in case you didn’t get the point. “Separate” seems to be more satirical of the state of modern hip-hop’s culture, speaking about separating the real from the fakes.

It is rare that any artist can take such unorthodox beats and disparate sounds and raps, and make them, not only interesting, but also captivating. Marley Makarah embraces conventional hip-hop tropes with a flair for experimentation and manages to emerge as one of the most immediate albums of its kind. One of Marley’s most admirable qualities is that he is less about self-indulgence and more about making the experience as entertaining as possible for the listener.