We’re living through a period of extreme political, societal change, and with issues of sexuality, gender, race, and class all in flux, we’re once again seeing a flowering of voices using the spoken word, poetry and music, to get their voices out to the world. The electrifying atmosphere that comes from listening to the words of wisdom, set to music, and narrated by Solomon Tention, on his album “Unfiltered; Inspiring Millennials on Purpose, Vol1” is both incomparable and awe-inspiring. Solomon is a scholar, author, and entrepreneur who has dedicated his life to creating environments that enable people to grow and achieve holistic success. He has featured nationally, on CBS, ABC, FOX, and various other media outlets. Focused on inspiring others towards a life on purpose, Solomon himself is inspired daily by the quote, “Success can’t be climbed with your hands in your pockets.”

Solomon Tention has the resonant voice of a rapper, the cadence of a poet, and the mindset of a philosopher. Along with the thoughtful beat production, consisting of skittering percussion, rolling basslines and shimmering keys, these three aforementioned elements make “Unfiltered; Inspiring Millennials on Purpose, Vol1” a transcending listening experience. However, more than the music, which serves as a canvas for Solomon’s voice, it is the words, that really matter most. 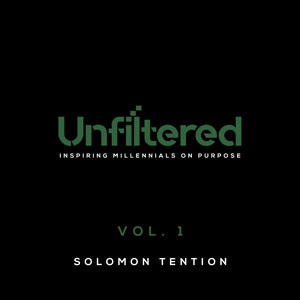 Solomon’s spoken word performances is the place where the internal and external collide – where he illustrates how our internal powers can dominate and defeat the external sources which may hinder or obstruct our progression in life. In a collection of 1o tracks Solomon Tention unfolds a serious of existential dilemmas in a clear and concise manner. His words are carefully chosen, and sharply focused, to get his messages across to the listener with the least fuss possible.

It helps that Solomon Tention has a portentous vocal tone, which carries his words with force and conviction, adding significant weight to each and every phrase he utters. His frank spoken word performances, which are both touching and educational, are refreshing. Across this recording, Solomon shows just how important this medium is to the new generation of growing people, who more than ever find themselves knotted within a bundle of personal issues, struggles and afflictions.

From the moment he opens the album with “Intro: You Have Purpose”, Solomon Tention seeks to transport listeners through a process of acceptance, consolidation and empowerment. His dialogues are designed to help conquer all your weaknesses and fears, in relation to the world and the people that surround you. It helps that Solomon’s mic presence is magnificent, as he channels his thoughts in a stream of consciousness, with a voice that echoes it’s truths long after they were spoken.

Solomon Tention puts forth a number of queries and anecdotes throughout the recording, all of which are supported by inspiring responses, as he tackles some fundamental growing-up issues on tracks such as, “The Real You”, “Embrace Silence”, “Growth is Uncomfortable…”,  “How Long”, “Not Having The Answers”, “Are You Really Different”, “It Don’t Matter…Keep Growing Anyway”, “Unpopular Opinion: There’s No Such Thing As Luck” and “What About Legacy”.

It’s exciting to see how serious educators like Solomon Tention are paving the way for others of the same caliber across the world, to use words and music to not just talk publicly about issues that need to be addressed within the new generation, but to inspire, enlighten and empower with authenticity and positivity. Now, if only some rap and hip-hop icons would take their cues from a powerful speaker such as Solomon Tention.