Royal Ruckus was established in Bakersfield, California by a couple of high school kids. A number of releases, a record deal, and countless performances later, and they re-emerged in February 2017. Their latest endeavor is ‘The Summer of the Cicadas’, a double album distributed by indie label, Invisible Library, in Nashville. From the album comes the single “These Things Remind”. Royal Ruckus are a breath of fresh air in a redundant landscape dominated by one-trick ponies with auto-tuners. Their lyrical flow dominates and reminds me of East Coast Rap from the late ’80s, but with a more contemporary production.

After listening to their concept album, ‘The Summer of the Cicadas’, it hit me that Royal Ruckus has to be the poster boys for balance in hip-hop. The perfect blend of old school and new school, backpack and boom-bap, classy and raw, lyrical and catchy, ironic and sincere.

Maybe most importantly, they explore new horizons while never straying from their roots. Almost everything they touch is perfectly well-rounded, never veering too far into one genre, but never hunkering down and fortifying themselves with what is familiar and comfortable.

It’s not hard to see why “These Things Remind” was chosen as a single; it has a hard emotional impact when you first hear it, and its catchiness sticks with you for a while after. A shift is coming to Hip-Hop where musicality is becoming a staple for the directions your favorite artists are headed, and I believe Royal Ruckus understood that with the creation of the songs on ‘The Summer of the Cicadas’. Hence we have a track wrapped up in ear worm musicality – from the instrumentation to melody. 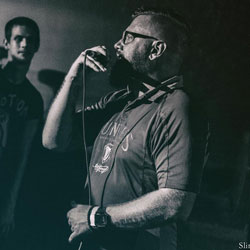 And as expected, the duo don’t fall short with the lyrical content either:  “Wrap my arms around your body and my heart around your soul / Disposition embodied one consistently enrolled / No need for stop and go, no need for ebb and flow / We should drop the show, love shouldn’t take that kind of toll”.

Royal Ruckus are meticulous songwriters who poured their heart and souls into this track. Chunjay attacks the smooth and soulful beat laid down by Shedlyn, and entrances the audience as he tells a story rather than rapping mindless and tedious lyrics. He proves himself to be an artist rather than another mainstream rapper.

This track is authentic, raw and pure. It’s heartbreakingly honest, which is why it should take the music industry by storm. In “These Things Remind”, Royal Ruckus prove that they deserve a legitimate spot in today’s elite alternative hip hop community.

The album too, does a great job of showcasing what hip hop should sound like in this day and age. Music done with intelligence, patience, and dedication. It isn’t just about making music, it’s about making art and ‘The Summer of the Cicadas’ does that.