A graduate from Ex’pression College in Berkeley, with a BAS in Sound Arts, producer and musician FZY was diagnosed with Schizophrenia in 2012. He has since released several albums and singles, with his latest album release being the ambitious, “The Bunny and the Cub”. The twelve track recording is an epic, post-rock sounding instrumental extravaganza embellished, with a vibrant dose of intense rapping and progressive metal intersections. Taken of the album is the single featuring back-to-back tracks “Compatibility” and “Voice of Treason”. In a year in which we’ve seen both formidable and lackluster bodies of work from both veterans and neophytes alike, FZY stakes a viable claim for album of the year with his latest release.

The single “Compatibility / Voice of Treason” finds FZY at his most cynical, skeptical and introspective, and while that’s not out of the ordinary for this talented producer and rapper, he delves deeper than we’ve ever seen him go previously, with this new project. 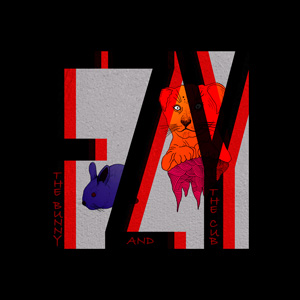 Its dark and foreboding tone is driven by resonating keys, loudly banging organic drums, bone-crushing basslines and squealing guitars. In the midst of it all, FZY’s angst-ridden rhymes. This has got to be the strangest, most epic sounding rap song I’ve ever heard on any album, and I’ve been listening to and collecting rap albums since the 80’s!

FZY’s rapping skills, rhymes, and storytelling are absolutely flawless. His deliveries are emotional and affecting as they worm their way into your consciousness, and often way beyond. “Compatibility / Voice of Treason” is also remarkable because it shows FZY with a heightened sense of urgency and energy.

There are dazzling displays of lyricism and emotion, as he tackles every inch of the toolbox to tell the story. At the same time FZY is aware that too much overt technique could strip the song of its listener empathy, hence he keeps the feelings palpable and believable.

The emotivety is also strengthened by a musicality that exceeds all of his other works. And it is when we enter into the realm of the track’s production status that FZY truly sets himself apart from his contemporaries.

There is so much to absorb and unravel, and the more you decipher, the more layers you uncover. Musically there’s absolutely nothing surface level about this record. Vivid, compelling and unafraid of delving into deep rock territory, FZY has found the ideal combination of progression and familiarity.

Expanding upon the hallowed blueprints of his instrumental craft, there are some real seismic peaks in the sonic approach here that seals the deal. FZY’s ability to shift tones and textures while allowing them to coalesce lucidly, ultimately affords “Compatibility / Voice of Treason” its ambitious perspective and epic post-rock sweep. Rap doesn’t get more illuminating, impacting and progressive-minded than this!